Katsinam (plural) are Hopi spirits that represent almost every aspect of Hopi life. They are also called the "Cloud People." They appear in dances from December to July each year. The dances are part of the Hopi religious calendar, and important in bringing precipitation for the crops (snow in the winter and rain in the warm months) as well as other blessings to the Hopi people. Katsina dolls are carved to give to children at these dances. Katsina dolls have also been carved for sale since the mid 1800s.

We recommend that you purchase only Hopi or other Pueblo katsinas (such as Zuni). So-called "Navajo kachinas" are simply poor copies or completely made-up figures such as "Medicine Men," often done on a lathe, factory-line style, and have no significance whatsoever. While Navajo spirits called "yé'ii" are part of their culture, katsinas are not. If you want to know more about Navajo yé'ii spirits, see our Sheldon Harvey gallery.

We specialize in work by some of the best Hopi carvers. Our emphasis in sculptural dolls is on extensive detailing in the carving (hands, muscles, hair, etc.), realistic body proportions and as much of the doll as possible carved from one piece of wood.  In traditional dolls we try whenever possible to carry work with natural paints and accuracy in carving. 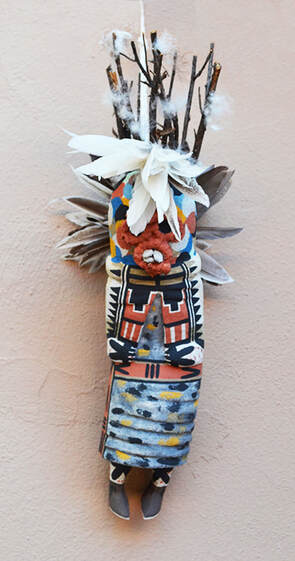 Randy Brokeshoulder traditional Masaau katsina of cottonwood root, twigs, traditionally made vegetal paints, feathers, and down, 14" high by 6" wide, $485. Now $388. Masaau is the only katsina who is also a god, and was Kent's favorite.
Alfred "Bo" Lomahquahu 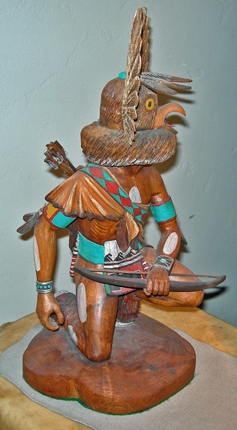 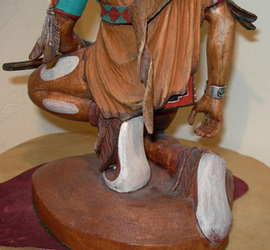 Alfred Lomahquahu​ Owl katsina doll. Alfred has won many major awards for his work. He always creates katsina dolls with unusual poses. Measures 15" high and 8 1/2" wide. $5000. Now $4000.
Please call 505-243-0414 or 877-606-0543 toll-free, email greydog@greydogtrading.com,
or visit us in Old Town Albuquerque to place your order.
A portion of all sales by Grey Dog Trading go directly to The Zuni Fetish Museum.